If you follow me on Instagram or Twitter, then you’ll know that I went to LondonEdge for the first time at the weekend. I went with my bf, after visiting my sister in her new student house in Brighton. We had planned on going on the Sunday, but we were so knackered after walking from King’s Cross to Shoreditch to our hotel (why did we do that?!) that we stayed in Shoreditch instead. We ate street food, discovered street art (I’m so street) and watching movies in our hotel room. The next day, on the Monday, we headed to LondonEdge.

Here’s what I thought.

As we wandered around there were lots of brands that I hadn’t heard of before. Some were young brands, others were just new to me, but it was cool to discover new stuff this way. Having a chat to the business owners and stuff, getting to know a bit more than a regular consumer might. I’ll be putting up a blog of my top picks from the show a bit later! I’ll link to it here when it’s done.

There were lots of people milling around, but there weren’t as many as I was expecting. By all accounts, it was busier on the other days. I saw afterwards that the bloggers that I would have loved to have met, Wioleth, Olivia Emily and Foxxtailz, were there on the Sunday and the Tuesday, so I was a bit gutted about that. Did spot Lusy Logan and Ryan Davies Hall and Shelly d’Inferno though – but I was too scared to say more than “hi!”.

Unfortunately, we missed them all. I think they were aimed at business owners anyway, but they would have been interesting all the same. The secret history of tattoos looked good from the programme, but that was on a different day so we would have missed it anyway.

Everyone Assumed I was a Buyer.

Okay, I know it was a trade show, but everyone was giving us price lists and asking us where we were from. Sheepishly told them I was a blogger. Which was cool in that I was actually there as a blogger and it was the first time I’ve ever really said that. But, the exhibitors mainly lost interest when they found out I’m just a little blogger trying to make a name for herself.

Layout Could Have Been Better.

Despite the fact that we wandered round twice, there were definitely some brands that we missed. I read in the Drapers’ show report that some exhibitors felt that it could have been better if similar brands were grouped together. I think that would have worked well too, then I don’t think I would have missed any stalls that I might have regretted missing.

I Got Some Awesome Sneak Peeks.

Okay, one in particular. The Killstar/Manson collaboration looks awesome. I took some photos of some of the stuff before a lady told us “no photos please” after she found out we were nobodies. So I have embargoed Killstar/Manson collection photos on my phone. Cue evil laugh.
I’m going to be a good blogger though and not show you. Sorry! Honestly – stay tuned, it’s awesome.

The Catwalk was Really Fun.

Catwalk was really fun but it was a bit too focused on vintage fashion for me. The Queen of Darkness show featured some good looks, but it would have been cool to have more “darker” fashion labels involved. Some of the themes missed the mark too I think. The Jawbreaker show tried to go for a post-apocalyptic theme but it didn’t seem cohesive to me. Their clothes were too clean, white and stiff to make a statement, even with a gas mask and a dead landscape background.

I Would Definitely Go Again.

Next time, I think I need to go with a bit more confidence, backed up by a bigger audience and maybe some business cards, so I can actually do some networking. Next time, I’ll try and actually talk to people without scuttling off because I’m scared! That way I can really make the most of it as a trade show, as opposed to going in the hope of scoring free pin badges (which didn’t happen btw).

Did you go? What did you think? 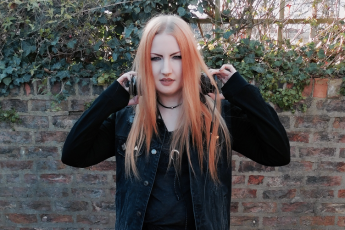 Outfit of the Day: Headphones 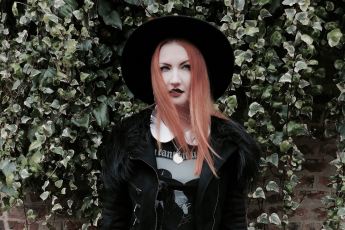 Outfit of the Day: Black on Black Stripes 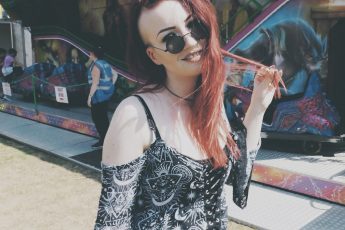